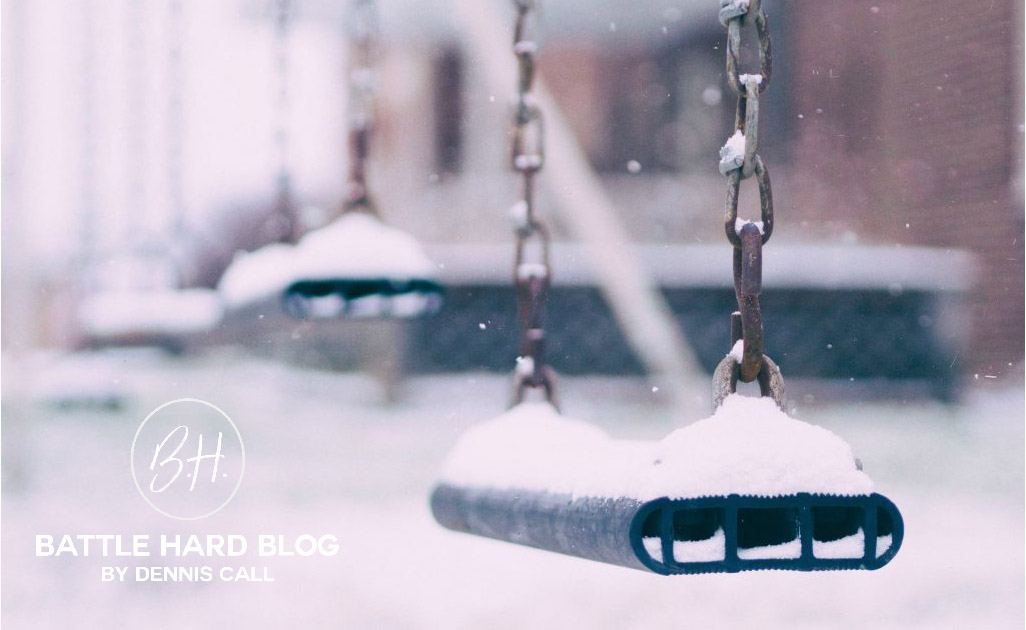 Is Teaching Really Foundational to Discipleship?

Shortly after returning to Fort Campbell, Kentucky from my second deployment to Iraq, a severe winter storm moved through covering everything in the area with a thin layer of ice.  It was absolutely breathtaking to behold.  The next morning was even better, as we discovered it had snowed more than five inches (I know, five inches is a light dusting to some).

After we ate breakfast, my oldest son and I went outside to play in the snow.  As was typical with my boys, the rougher the play the better, so we started to throw snowballs.  While we were chucking snow around, my younger son decided he wanted in on the action and had mom get him dressed so he could join the fun.

In the meantime, we were making snowballs near our deck.  When we’d exhausted our supply of snow at the base of the stairs I moved over by our swing set as my boys waited.

As I walked across the yard I heard a soft voice behind me calling, “Dad did you make these foot prints for me?”

When I turned around my older son was only a few steps behind me with his feet firmly planted in the foot prints I had just left in the snow.  God couldn’t have made a clearer statement about the importance of leading my family well than He did that morning.  My children were watching!

I began asking myself two simple questions that day.  First, what am I teaching my children about God in what I think, say, and do?  Second, will I lead them well and toward the Lord, or will I lead them poorly and astray?

These same questions hold true in regard to Christ’s command to make disciples.

The Importance of Teachers

Each and every day teachers mold the future of their students through impacting their views and helping them to develop understanding. Teachers have the ability to “foster creativity, develop character, and give students lenses with which to view the world.”

The Lord not only commands us to make disciples, but He modeled how we are to go about that work, heavily emphasizing the importance of teaching. In his second letter to Timothy, the Apostle Paul wrote “The things which you have heard from me in the presence of many witnesses, entrust these to faithful men who will be able to teach others also.”

There are four generations of teachers in this short sentence:

Simply put, Christianity is intended to be generational.  Think about the impact four generations of faithful Christians can make.  We’re not talking about pastors or missionaries here. God has called every Christian to this work. Are we taking our ability to influence seriously?  Some are, but there remains an ill-informed majority of Christians who have not submitted themselves to this great and blessed task.

“Biblical illiteracy leads to confusion, conflict, and compromise that undermines what it means to be a disciple of Christ.”

A Scandal of Biblical Proportions

Earlier this year the Barna Group completed a study revealing “51% of churchgoers don’t know of the ‘Great Commission.’”  Just as disturbing is that only one in four have heard of the “Great Commission” but don’t know what the phrase means.

Unfortunately, this trend is nothing new.

In the last few years a number of studies have shown the scandalous trend toward Biblical illiteracy among Americans.  The problem is in large part generational.  Young postmodernists hold subjective views of truth rejecting Biblical authority—this shouldn’t be too much of a shock.  What is shocking however, is that according to researchers Christians barely fared any better.  As an example, is “God helps those who help themselves” a Bible verse? 82% of Americans believe it is.  81% of self-identified born-again Christians believe the same thing.  No, it is not a Bible verse.  In fact, the truth is we are helpless apart from God’s super abundant grace.

In the article referenced above Dr. Albert Mohler makes the consequences abundantly clear.  Christians without a commitment to teach Biblical truth “will produce believers who simply do not know enough to be faithful disciples.”  This Biblical illiteracy leads to confusion, conflict, and compromise that undermines what it means to be a disciple of Christ.

Developing our knowledge of biblical truth is a deliberate act. Those who teach must commit to personal study of God’s Word, for in Christ alone are the words of eternal life.  The Apostle Peter wrote that by God’s divine power and giving all diligence will we be able to “add to your faith virtue, to virtue knowledge, to knowledge self-control, to self-control perseverance, to perseverance godliness, to godliness brotherly kindness, and to brotherly kindness love.  For if these things are yours and abound, you will be neither barren nor unfruitful in the knowledge of our Lord Jesus Christ.”

Recovering our Biblical foundation begins at home.  Parents are the most important educators of their own children, diligently teaching them the Word of God.  My two young sons are now teenagers and they have three younger siblings hot on their heels.  I still ask myself regularly, “am I leading them well?”  I’m making footprints for them to follow, so I had better know where I’m leading!  I had better be deliberate in what I teach them about the Lord!  Then I will be able to teach others also.

Whether we admit it or not, those around us are looking for an example to follow.  How we live teaches them far more than what we might say.  For this reason, living God’s truth as teaching is absolutely foundational to discipleship.

How are you teaching those you lead?