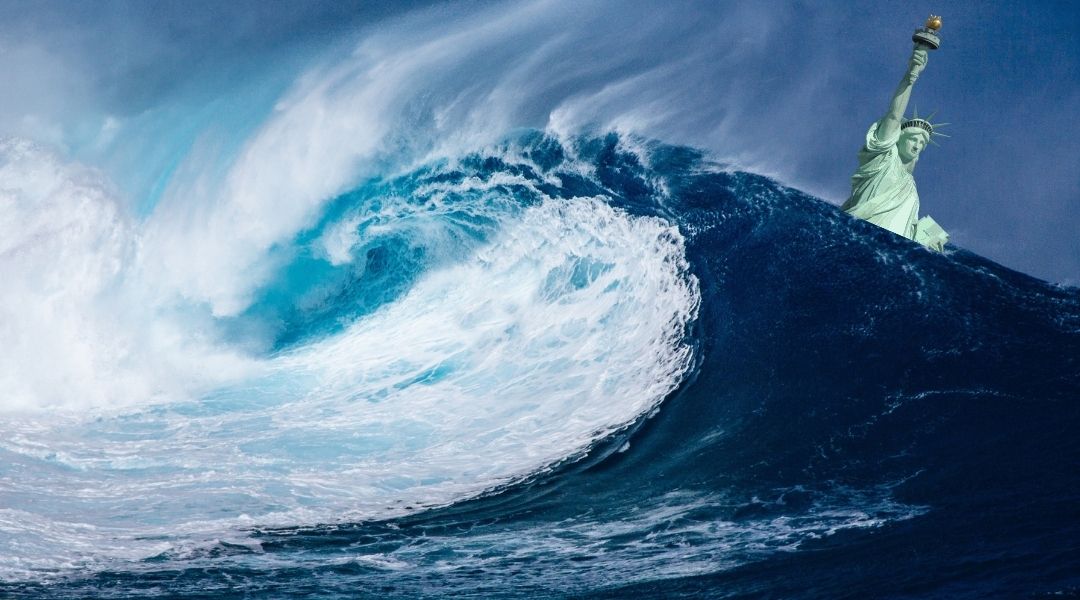 Once upon a time there was a terrible health pandemic that hit the world.  Everyone was asked to bunker down indoors, stay 6 feet apart from other humans, mask up in public, keep children out of school, and most importantly, stop attending church.  Words like “liberty” and “freedom” from the people who lived in “the land of the free and home of the brave” became offensive words to the common good.  Night after night the news media scrolled an endless numerical count of the afflicted.  It frightened the masses; it appeared everyone was at great risk and peril.

But then something encouraging happened…

A small group of people, most notably called Pastors, began to sound their own alarm.  Their spiritual training gave them eyes to see what was really going on behind the curtain and some of it was truly evil.  They even possessed basic Math skills and uncovered that the numbers being thrown out by the Ruling Emperors were not adding up—common core at its worst.  Their sound voices began to reawaken their flocks from the fog of fear.  They thought it would be calming and wise to give a nightly update of all the people who had survived the plague—which was very high for the healthy.   But that was apparently a bad idea since no one could speak such things without being shut down by the Rulers and their assisting arm—the mainstream media.

And then some Doctors stepped up to help and used their lifelong medical expertise to inform people about drugs that had been around for decades that could help keep the virus away or strengthen one’s immune system.   Strangely, and almost immediately,  said drugs were pulled off the market and made inaccessible to everyone, while the health professionals who dared to speak up  were vilified, deemed subversive, and kicked off all social media platforms.  Their once stellar careers were reduced to conspiracy theorist agendas. (Ephesians 6:12)

It was at the same time, more commoners—mostly of the spiritual ilk,  began to sense that something was totally off.   Simple questions plagued simple minds like how come casinos, big box stores, and abortion facilities were allowed to remain open during the crisis, while small mom and pop businesses had to shut down like infected petri dishes in a lab. The average peons were intrigued on how the plague was more virulent at churches than places like Wal-Mart and Home Depot. It didn’t make for common sense. (And they were mere commoners after all)!

The newly labeled subversives were also disconcerted that the Rulers deemed chanting in angry protest as safe but singing worship music in church as dangerous and not permitted. How was one to make any sense of this?  Children inquired of their parents why walking into a restaurant was dangerous to one’s health–until you were seated and then the threat was no longer present.  The science was new, ever-changing, authoritarian, and quite baffling  especially to the average person.  The Rulers demanded that they stop asking questions and just obey.  (2 Timothy 3:7)

People became suspicious of one another, especially after the news of a “one size fits all” injection which supposedly could beat the nasty plague and get life back to normal.   The incessant question of the day:  Will you stand with the intelligent more informed Emperors or are you a religious, conspiracy theorist,  fanatic, who just can’t seem to do your part, fall in line,  and love your neighbor by doing what everyone else is doing?  The battle cry became do that which is good of for all of mankind and stop being uncaring and selfish.

Those pesky banned medical people showed up again to discuss some problems with the approach the Emperors were taking like ignoring the science of those who already had the plague and developed natural God given immunities.  They also expressed valid concern for the population of young adults and children who fared well against the plague.  The shunned doctors didn’t understand the illogical medical coercion that was blatantly happening and dangerous to some people’s health. (John 10:10)

While the Rulers continued to hide their whips, they used other harsh measures that couldn’t readily be calculated.  They bribed, pressured, threatened, shamed, punished and even began taking away the commoners right to liberty.  Colleges, corporations, and companies jumped in on the purge. Take the jab or forfeit your right to live a normal life.  Even as numerous anecdotal reports of people being killed and maimed by the experimental injection was increasing.  The Rulers did not care and the media censored such data as quickly as it appeared.

Sadly, none of these efforts mattered anyway, because the promise of “things going back to normal” was never part of the original plan.  There would be more deadly plagues caused by various Greek-letter variants lingering in the shadows that would require more compliance and more doses of experimental shots.  Some of the more blatantly evil Emperors even threatened complete banishment from all societal freedoms to those who refused them.

The rulers were confident that this “continual crisis mode” would go much smoother this time around, as they were banking that the masses had already been infected with the right dose of fear by the Centers for Doubt and Confusion (CDC).

History would eventually reveal whether freedom and liberty survived this attack.  It was obvious the commoners were in the fight of their lives.  Their eyes were wide open, but did they have the courage and spiritual spine to overcome the evil by standing strong, united, and immovable regardless of the oppression to come.  Would their spiritual eyes respond with an eternal mindset guided by that sacred book?

Regardless, the Emperors knew their power against this enemy group would be troublesome because, while they didn’t understand them, they knew there was something inherently frightening about a people who called themselves “children of God.”

Truth is the death of propaganda.  Educate yourself and stand up for your God given rights to liberty and freedom as given to us by God and contained in our Bill of Rights and our U.S. Constitution.

“Fear not for I am with you. Be not dismayed, for I am your God.  I will strengthen you.  Yes, I will help you. I will uphold you with My righteous right hand.” (Isaiah 41:10)