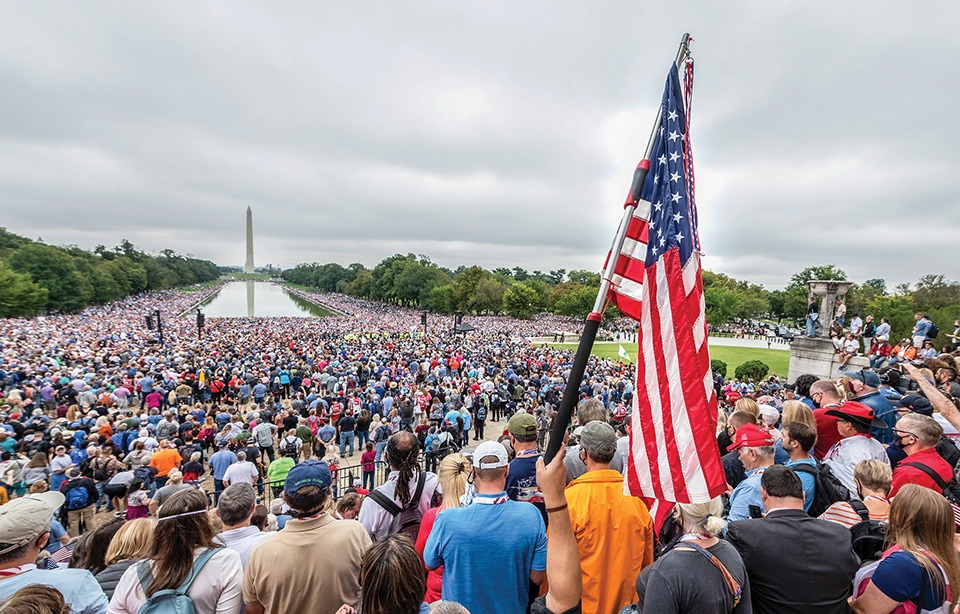 Women Arise : The Magnitude of the Moment

I have a family portrait that was truly  picture-perfect. To this day it evokes deep emotions within me and brings me back to that special moment in time.   It was taken at my husband’s retirement party, a night filled with family, friends, and formal presentations with many accolades.  Like a circus ringmaster, it took me months to juggle a date that would allow for all four of my grown boys to be in attendance.  Throughout the evening,  I kept seeking out the photographer reminding him to not forget to take my family picture.  I parroted, “You never know when we will all be together again.”  Little did I know that just a few months later, my oldest son would die, and that picture would notably remain our last official family photo.

Pictures often tell a story in your heart.  One picture of late that was missing from all of the major news outlets was the recent gathering of 100,000 Christians in Washington DC for “The Return” with Jonathan Cahn, and Franklin Graham’s prayer march.  While the media ignored us, I am certain that God did not.  The goal of the event was to collectively, as the church, seek the face of our Father in heaven.  Like many who attended, I felt a sense of urgency to plead for mercy as my country is broken, shaken up, and worthy of judgment.

We worshipped.  We prayed.  We interceded.

The divine timing of this event could not be ignored with the passing of Judge Ruth Bader Ginsburg occurring at the beginning of the Jewish New Year.  Her death left a much-coveted seat to be filled on the Supreme Court.  And just as swiftly as the crowds huddled together in prayer, the formal announcement of her replacement was made.  It would be  a woman of faith, Amy Coney Barett.  I knew I was present in a significant moment of spiritual history.  You could feel a shift in the atmosphere.

I can’t adequately describe what it was like being around a sea of brothers and sisters, strangers, yet familial, as endless smiles and gazes into each other’s eyes confirmed we belonged to the same family—there was an unspoken unity of mind and likeness of Spirit.

So many moments brought chills to my body and piqued my spiritual wonder.

The blare of the trumpets to open up the event, and the shofars sounding off at various times, accentuating the gravity of this biblical assembly, as described in Joel 2: 15, was riveting. “Blow the trumpet in Zion, declare a holy fast, call a sacred assembly.”

On Friday evening,  it was raining.  You could see the constant stream of rain in the background of the Jumbotron during various speeches, yet oddly, we were not getting wet. Immersed in worship and prayer, none of our group mentioned it, until we were on our way back to the hotel.  And then we were collectively like, what just happened?

Rabbi Jonathan Cahn pressed in on a powerful message comparing our nation’s actions to the apostasy of ancient Israel.    He said, “We too have turned away from the God of our foundation, have estranged ourselves from Him.  We drove God out of our hearts, out of our government, out of our ways…out of our lives.  And as we drove Him out, we opened up a vacuum into which came a flood of other gods: prosperity, comfort, sexual immorality and obsession. We too have become our own gods.”  He called for repentance.  And then he dramatically smashed a clay vessel mimicking the scene of the prophet Jeremiah in the Valley of Ben Hinnom.

Rabbi Cahn repeatedly called us to, “RETURN, RETURN.”  He asked everyone to kneel on the ground in corporate prayer.  That visual alone, thousands of people collectively on bent knees, had tears falling from my eyes to the already wet ground.  Fervent intercession took place as he pled, the voice of God is calling out for a RETURN.  He continued, “It is through shaking that revival comes and through the shaking of a nation the people of God must shine.”  And at that very precise moment, the heavens literally thundered.  Then he recited Joel—“It shall come to pass in the last days that I shall pour out my spirit..” and it thundered again.  Such a holy moment.

Meanwhile Franklin Graham’s prayer vigil was led by prominent Christian leaders around our country.  They stopped at 7 key points on the mall to pray specific prayers finishing up at the US Capital. Everywhere you looked there were large gatherings of people, some  randomly praying in groups, some with arms linked, some on their knees, some stretching their hands over monuments and statues facing the Capital.  The magnitude of this in in the spiritual realm was stirring.

I have my own personal photo taken of this day, and I know when I look back at it in the future, the supernatural moments will be freeze framed in my mind.   I also believe, like my own family portrait, that “you never know when we will all be together again,” or more importantly whether we, as God’s children, fully understand the magnitude of the moment we are living in right now.

So, I plea, Women Arise!  May God hear our prayers and heal our land.